Emergent Qualities and the Benefit of Teamwork

Smooth, efficient, cohesive teamwork creates a high performing team, and it’s rare. It takes a lot for leaders to get their teams to this point and in many cases, they fail. Once a team has reached the point whereby individuals within the team work cohesively and collectively towards the team goal, they hold a serious competitive advantage over their competitors. The emergent properties of a high performing team create this advantage. This is when the team makes better, faster decisions, spends more time on collective goals rather than office politics and negative conflict and has buy in accountability from everyone. We can use methods like The Lencioni Model and the The Bruce Tuckman Model to identify components of team chemistry and team development that must work in order to create a high performing team.

Trust is the main element of a high performing team. Every other aspect of a high performing team is built on this principle. Once you have established trust within your team you have started your journey towards the ultimate competitive advantage, one of frictionless work towards collective goals or simply put, good teamwork. Members of your team must be able to admit when they have made a mistake, when they are wrong and when they need something. When they can do this it creates an atmosphere of transparency, which directly increases diversity of ideas and therefore openness. When a leader manages to create this kind of environment other aspects of team development will become easier to tackle and overcome.

The powerful effects and resultant change that come from a simple, open and meaningful conversation are substantial. As a leader this can be your first method of building trust within your team. This is something we focus on doing at my company and I’ve witnessed the lasting effect of something so simple but so rarely done. So it’s quite simple — you just have to build trust. However, if you are having problems creating trust you can try a number of exercises. Personal Histories is a low risk exercise that requires team members to answer a short list of questions about themselves. You could use the Myers-Briggs Type indicator test — this provides awareness towards individuals personality styles and preferred roles in a team. Or you could use the Team Effectiveness exercise, this requires team members to publicly identify the single most useful contribution each of their colleagues makes. Ultimately these exercises are all aimed at creating transparency and openness between team members, this being the essence of trust. 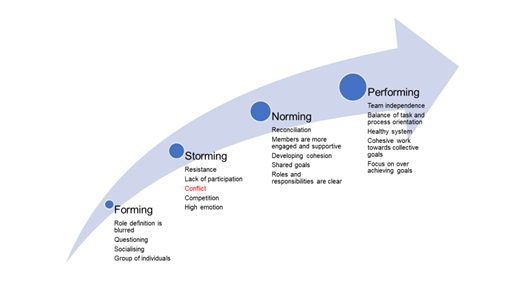 Conflict usually arises as a bi-product of the storming phase, it is apparent in every stage just most common here. This is because individuals are figuring out the relationship boundaries that comes with working as a part of that team. Through conflict teams can figure out the most productive way to approach tasks, therefore how quickly individuals learn these boundaries will determine how long it takes before they are high performing. However, reaching the optimum level of conflict that drives productivity is hard — a good leader recognises this and aims for a healthy midpoint — where the conflict is neither too destructive and personal nor is it lacking to a point where it causes artificial harmony. It is important to note that managed conflict or healthy debate focused primarily on issues related to the collective goal is essential. Additionally, as a leader you must strive to reduce artificial harmony and destructive personal conflict. When these issues arise in a team there are techniques that can be used to address them. One of these is Real-Time Permission, this is a process whereby team members encourage each other not to retreat from conflict or debate. Conflict will always be present in teams, it can either be a driving force or hinderance to the team’s performance — achieving a healthy mid-ground is hard but still achievable for teams with the lowest budgets.

High performing teams have complete buy in and resultantly accountability from every team member. In The Lencioni Model commitment and accountability are two separate levels. I would argue that these are the most closely related, as without one you cannot have the other. When team projects start there will be conflict. Good team leaders and good teams will overcome the disagreement and get those who initially disagreed on board and moving in the same direction as the rest of the team. True commitment occurs when each team member feels as if their voice has been heard and resultantly understand the final decision has been made in the best interest of the team. Furthermore, commitment team members have towards the team and each another creates an environment of collective accountability. It is more effective when team members have peer to peer accountability rather than exclusively to the leader.

To enhance commitment leaders need to lay out clear deadlines and review key actions after meetings and align on them. This way there is no confusion. Another interesting way to increase commitment is to use Low Risk Exposure Therapy. This exercise demonstrates to the team that their decisions after substantial discussion and no research or analysis are far better than expected, this therefore gives them more confidence in their decision-making process and allows them to make better decisions going forward. Once the decision has been made accountability can easily be maintained by rewards, review and publicly clarifying what the team should be aiming for.

The final aspect of The Lencioni Model is in-attention to results. If a leader has successfully addressed the previous aspects of The Lencioni Model, the team will pay attention to results. However, there are still certain issues like pursuit of individual goals and status that must be managed to achieve constant attention to results. As a leader you will build your own competitive advantage if you effectively manage the stages of team development and the different aspects of The Lencioni Model. By doing this you will create your new competitive advantage — a high performing team. Can you think of any steps you can take in order to build a high performing team? How could you push your team through these stages? What areas could your team improve on? If you’re not sure, get in touch.